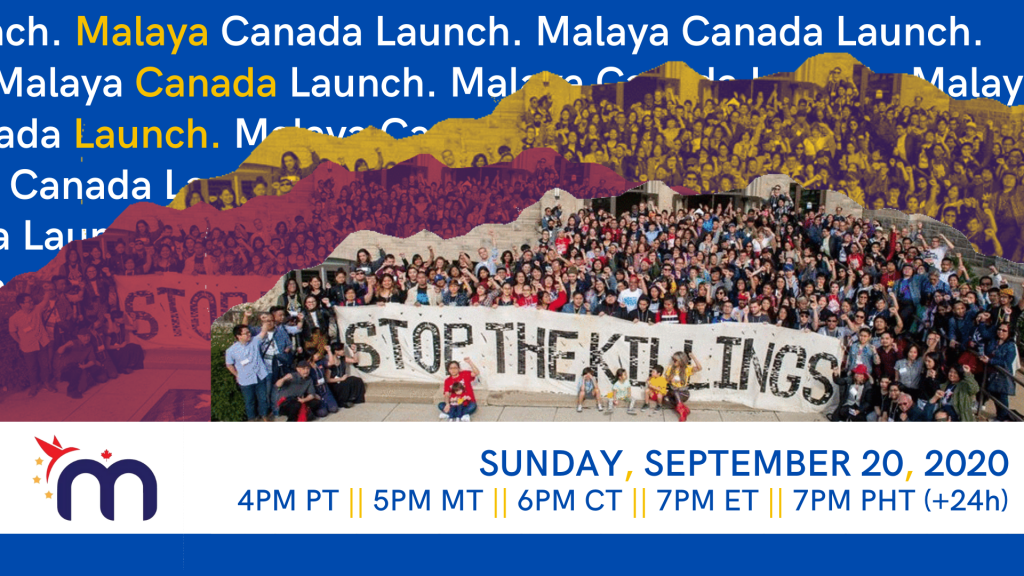 PRESS RELEASE: Canada Filipinos for “freedom” in the Philippines to hold online launch

Canada Filipinos for “freedom” in the Philippines to hold online launch

Various groups and personalities are sending an open letter addressed to Canadian Prime Minister Justin Trudeau pressing for “the strongest possible diplomatic intervention in response to  gross human rights violations and abuses in the Philippines.”

The formal launch of Malaya, whose name means “free” in Filipino, in Canada is set to be online due to the COVID-19 pandemic. That follows the series of weekly Malayang Kapihan webinars in August, which worked well as virtual events. Its theme song “Malayang Bayan” is written by Toronto-based Lui Queano and Philippine-based Karl Ramirez and Boogs Villareal of the band Pordalab.

On September 20, the guest speaker will be Filipino-American philanthropist Loida Nicolas-Lewis who will share her thoughts on “The State of Democracy, Sovereignty and Justice in the Philippines.” Lawyer Fhilip Sawali, Chief of Staff to detained Philippine Senator Leila De Lima will also be speaking.

Malaya Canada seeks to “broaden opposition to fascism” and “broaden Canada-based support for the cause” that opposes Philippine President Rodrigo Duterte’s war on drugs, militarist policies, curtailment of democratic and civil rights, corruption and dynastic rule, promotes genuine sustainable development, and defends national sovereignty. The growing opposition movement takes its cue from the U.S. Movement Against Killings and Dictatorship in the Philippines of the same name.

Malaya Movement in Canada: Official Countrywide Launch will be September 20, 2020 at 7:00 p.m. EDT / 4:00 p.m. PDT. Reserve your place ahead of time. Register at https://tinyurl.com/malaya-ca-launch