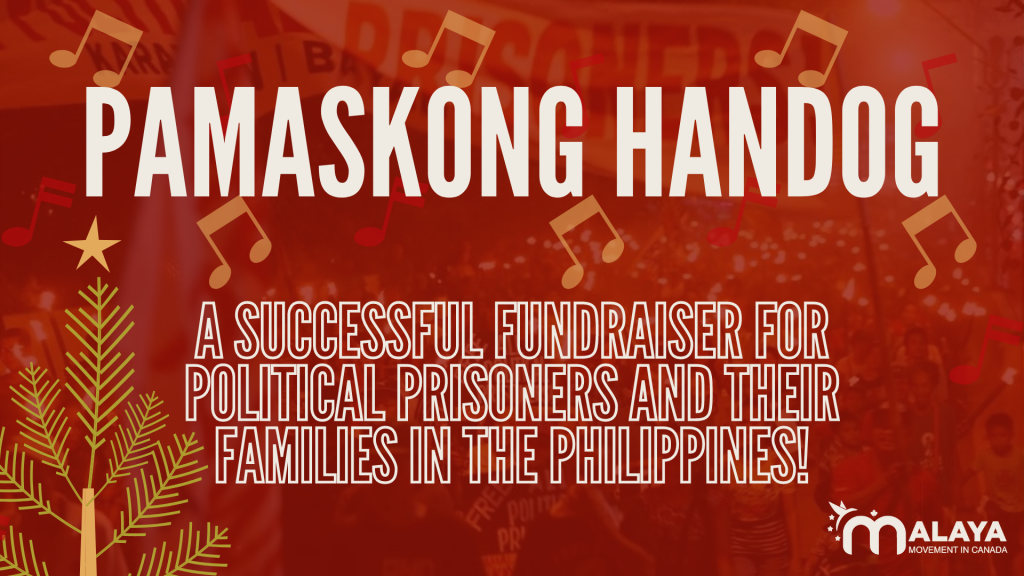 Fides Lim, wife of political prisoner Vicente Ladlad and the spokesperson of KAPATID underlined the significance of the Christmas Benefit Pamaskong Handog for KAPATID, the support organization of families and friends of political prisoners in the Philippines in her online keynote message. She said, “Your Christmas campaign comes at a time of unprecedented human rights violations when the process of remembrance and solidarity is imperative. Remembering is not so much about those who did not come to visit but about those who came and never left because they provide continuous support. From projecting the issue of political prisoners to pressing their release from unjust imprisonment, and gathering various political, material, financial support to protect their rights and welfare.”

Pamaskong Handog was created and organized by the Malaya Movement in Canada as a “zoom-a-thon” fundraiser and musical showcase last December 5th that ran for four hours, cutting across time zones from Canada coast to coast. Donations came in during the program from ordinary men and women across Canada and the US, from caregivers and essential workers, seniors, professionals, alumni associations and migrant groups, young people, and concerned Canadians.

Donors continued to respond even after the program was over which prompted Malaya Canada to keep the “donation box” open, thanks to the generosity and solidarity of people in Canada. Donors are asked to e-transfer their donations to malaya.xmas@gmail.com and make sure to include their email addresses with the donation. Donors can also make a donation in someone else’s name as a gift.  Alternate ways of giving are available at malaya-xmas.carrd.co.

KAPATID told Malaya Canada what the $10 minimum entry donation, roughly equivalent to PhP 370, buys in the Philippines. In graphic images, Malaya Canada showed what the $10 can buy, like two face masks and three pairs of slippers or 10 bananas and ½ kilo of fish!

More than twenty wonderful talents from Canada, the United States and the Philippines gave their gifts of song, music, prayer and poetry. These included Janet Lumb, Lyn & Nik, Lyla Luciano, Han Han, musicians from the Philippine Philharmonic Orchestra and the broadcast station ABS-CBN, Anakbayan Canada singers, Nobel Queano, the Maestros, the 14 Strings! Rondalla, Fr. Albert Alejo, Bandang Uppercase, Koro Pilipino, and so much more. The trailer of Pamaskong Handog can be viewed here.

Marissa Corpus, spokesperson of Malaya Canada, encouraged the viewers to “be generous and share our blessings.  Tuloy ang laban! On with the fight.”

From British Columbia, Malaya convenor Treenee Lopez, said, “We support the call to free all political prisoners, and this Christmas we want you [political prisoners and families] to know you are not forgotten, we will continue to fight for you, for justice democracy and freedom.”

Malaya Quebec members sent the political prisoners their Christmas greetings of hope and solidarity: “We are with you in all your struggles, we will continue fighting for you and your freedom.  We are with you in spirit. We pray that this despicable political repression in the Philippines ends soon and you will be free to celebrate Christmas with your families.”

Breaking news of the arrest and detention of young peasant organizer and Mother Amanda Lacaba Echanis and her month-old baby boy came out a couple of days before the event which made the benefit even more urgent. Her case and that of the still detained mother Reina Mae Nasino were highlighted at the zoom-a-thon benefit.

Pamaskong Handog was a serenade from Malaya Canada and all the generous donors to KAPATID. It was also a strong hand of solidarity extended thousands of miles from here to the Philippines because as Fides and the families say, “in solidarity, there is nothing more powerful than those who are unafraid.”

The Pamaskong Handog event will be available for viewing online soon so please follow us on Malaya Canada social media sites.